Are you looking to find inspirational, New Year resolutions and happy New Year quotes? If you need words of wisdom to decide on your New Year resolution or quotes to motivate someone this New Year, this is your lucky day as you have come to the right page.

In this page, you will find famous New Year quotes, the best New Year Quotes and many more, which you can send to friends, love one and family members. So, if you want to stay motivated, and welcome the New Year with a positive attitude, fresh start and open arms and hearts to new opportunities and beginnings continue reading as I have collected awesome New Year quotes.

Check them out my collection of New Year quotes and sayings to share and inspire, motivate and entertain your friends, family members and special someone.

“The only way to spend New Year’s Eve is either quietly with friends or in a brothel.  Otherwise when the evening ends and people pair off, someone is bound to be left in tears.” – W.H. Auden 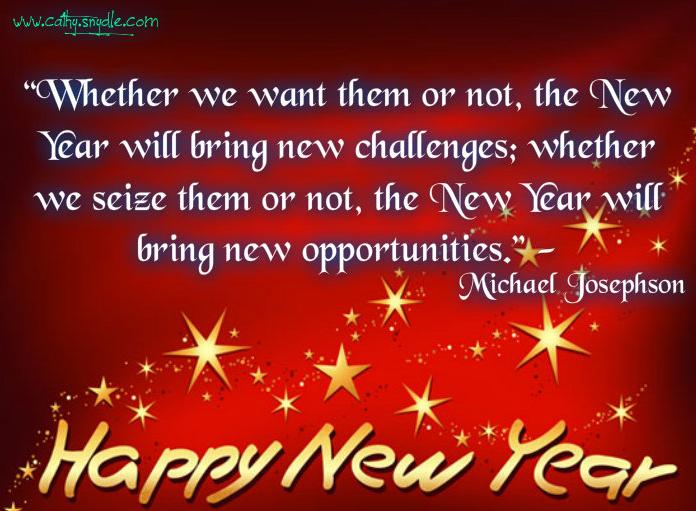 “An optimist stays up until midnight to see the new year in.  A pessimist stays up to make sure the old year leaves.” – Bill Vaughan

“Many people look forward to the new year for a new start on old habits.” – Author Unknown

“A New Year’s resolution is something that goes in one year and out the other.” – Author Unknown

“Be always at war with your vices, at peace with your neighbors, and let each new year find you a better man.” – Benjamin Franklin 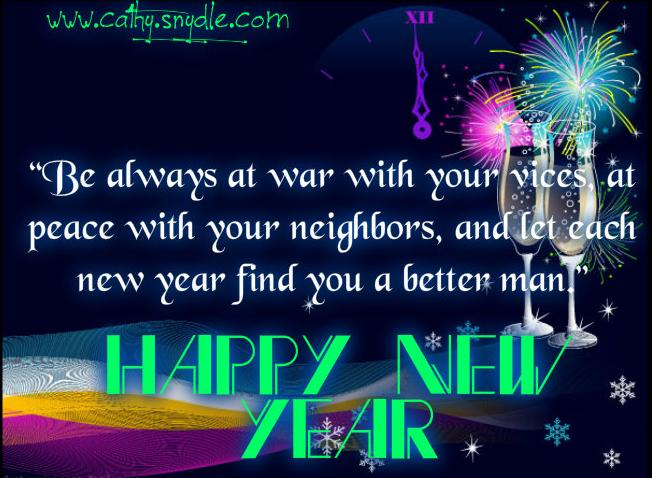 “What you do for Jewish New Year is you go down to Times Square… It’s a lot quieter than the regular New Year. It’s just a few Jews walking around going, ‘sup?'” – Jon Stewart

“This year my New Year’s resolution was to stop saying ‘Seacrest out!’ after I ejaculate.” – Zack Galifianakis

“The proper behavior all through the holiday season is to be drunk. This drunkenness culminates on New Year’s Eve, when you get so drunk you kiss the person you’re married to.” – P.J.O Rourke

“I wish I didn’t watch [Dick Clark] because New Year’s Eve is that one little time when you get to suspend the disbelief that next year is going to be crap. You forget about it! You look at the person next to you and kiss them and say “Happy New year!” and you have a moment of happiness. I don’t wan to be reminded at that exact moment of my own mortality.” – John Bowman 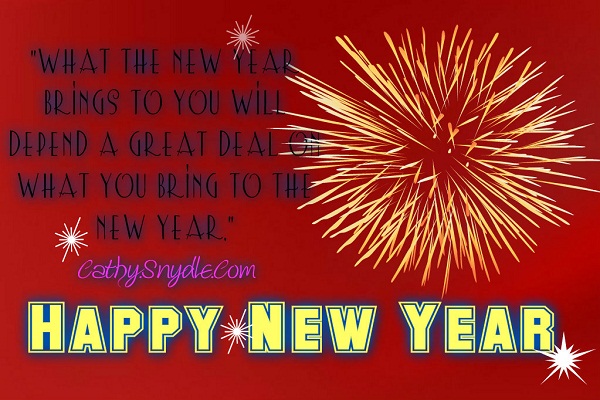 “The Old Year has gone. Let the dead past bury its own dead. The New Year has taken possession of the clock of time. All hail the duties and possibilities of the coming twelve months!” – Edward Payson Powell

“No one ever regarded the First of January with indifference. It is that from which all date their time, and count upon what is left. It is the nativity of our common Adam.” – Charles Lamb

“Year’s end is neither an end nor a beginning but a going on, with all the wisdom that experience can instill in us.” – Hal Borland

“Every man regards his own life as the New Year’s Eve of time.” -Jean Paul Richter

“The future belongs to those who believe in the beauty of their dreams.” – Eleanor Roosevelt

“Life is like riding a bicycle. To keep your balance, you must keep moving.” – Albert Einstein

“It does not do to dwell on dreams and forget to live.” – J.K Rowling

“The only limit to our realization of tomorrow will be our doubts of today. Let us move forward with strong and active faith.” – Franklin D. Roosevelt

“To live is the rarest thing in the world. Most people exist, that is all.” – Oscar Wilde

“For a new year to bring you something new, make a move, like a butterfly tearing its cocoon! Make a move!” – Mehmet Murat ildan

2) Whatever you did last year, Do it better

5) Believe in your abilities at all times,

6) Qutting is not an option. Keep Going.

7) Finish what you started”

“Cheers to a new year and another chance for us to get it right.” – Oprah Winfrey 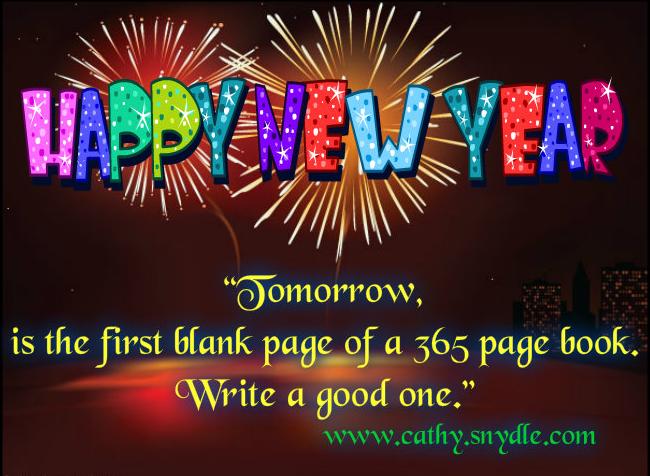 “Tomorrow, is the first blank page of a 365 page book. Write a good one.” – Brad Paisley

Whatever it is you’re scared of doing, Do it. Make your mistakes, next year and forever.” – Neil Gaiman

“Yesterday is gone. Tomorrow has not yet come. We have only today. Let us begin.” – Mother Teresa

“Every man should be born again on the first day of January. Start with a fresh page. Take up one hole more in the buckle if necessary, or let down one, according to circumstances; but on the first of January let every man gird himself once more, with his face to the front, and take no interest in the things that were and are past.” – Henry Ward Beecher

“Some people swear there’s no beauty left in the world, no magic. Then how do you explain the entire world coming together on one night to celebrate the hope of a new year?” – Claire Morgan

“Lower your expectations of earth. This isn’t heaven, so don’t expect it to be.” – Max Lucado

“What the New Year brings to you will depend a great deal on what you bring to the New Year.” – Vern Mclellan

“The merry year is born
Like the bright berry from the naked thorn.” – Hartley Coleridge

“Drop the last year into the silent limbo of the past. Let it go, for it was imperfect, and thank God that it can go.” – Brooks Atkinson

“Peace comes from within. Do not seek it without.” – Buddha

“The bad news is time flies. The good news is you’re the pilot.” – Michael Altshuler

“New Year’s Eve, where auld acquaintance be forgot! Unless, of course, those tests come back positive.” – Jay Leno

“A new heart for a New Year, always!” – Charles Dickens

“Matt and I have set a date. Matt and I will tie the knot New Year’s Day in the town of Swampscott, Massachusetts. Reserve your hotel rooms now. I will be having a gay marriage.” – Ben Affleck

“Santa Claus is on his way, It’s going to be a bright and a happy day, So pass on the happiness to every person you meet, Brighten up their day and touch their lives beneath. Merry Christmas and a prosperous New Year!” – Anonymous

“May Light always surround you;

Hope kindle and rebound you.

May your Hurts turn to Healing;

Every Kindness a Prism.

May Laughter infect you;

Your Passion resurrect you.

Through all that you Reach For,

“Here’s wishing you more happiness. Than all my words can tell, not just alone for New Years Eve but for all the year as well.” – Anonymous

“Resolve to make at least one person happy every day, and then in ten years you may have made three thousand, six hundred and fifty persons happy, or brightened a small town by your contribution to the fund of general enjoyment.” – Sydney Smith

“Your Merry Christmas may depend on what others do for you. But your Happy New Year depends on what you do for others.” – Anonymous

“Many years ago I resolved never to bother with New Year’s resolutions, and I’ve stuck with it ever since.” – Dave Beard

“May all your troubles last as long as your New Year’s resolutions.” – Joey Adams

“I made no resolutions for the New Year.  The habit of making plans, of criticizing, sanctioning and molding my life, is too much of a daily event for me.” – Anaïs Nin

“He who breaks a resolution is a weakling;

“New Year’s Day:  Now is the accepted time to make your regular annual good resolutions.  Next week you can begin paving hell with them as usual.” – Mark Twain

“Character is the ability to carry out a good resolution long after the excitement of the moment has passed.” – Cavett Robert

“Always bear in mind that your own resolution to succeed is more important than any other.” – Abraham Lincoln

“May the New Year bring you courage to break your resolutions early! My own plan is to swear off every kind of virtue, so that I triumph even when I fall!” – Aleister Crowley, Moonchild

“Making resolution is a cleansing ritual of self assessment and repentance that demands personal honesty and, ultimately, reinforces humility. Breaking them is part of the cycle.” – Eric Zorn

“People would cheer throw confetti and then go about breaking the resolutions they had made only moments before.” – Neal Shusterman

“We spend January 1st walking through our lives, room by room, drawing up a list of work to be done, cracks to be patched. Maybe this year, to balance the list, we ought to walk through the rooms of our lives…not looking for flaws, but for potential.” – Ellen Goodman

“Glory to God in highest heaven,

Who unto man His Son hath given;

While angels sing with tender mirth,

A glad new year to all the earth.” – Martin Luther

“You only live once, but if you do it right, once is enough.” – Mae West 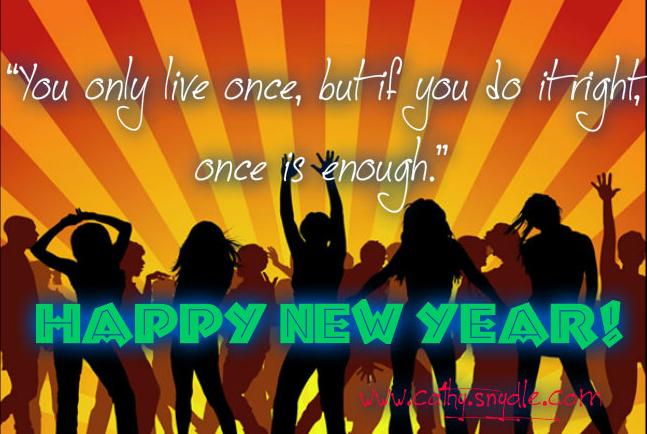 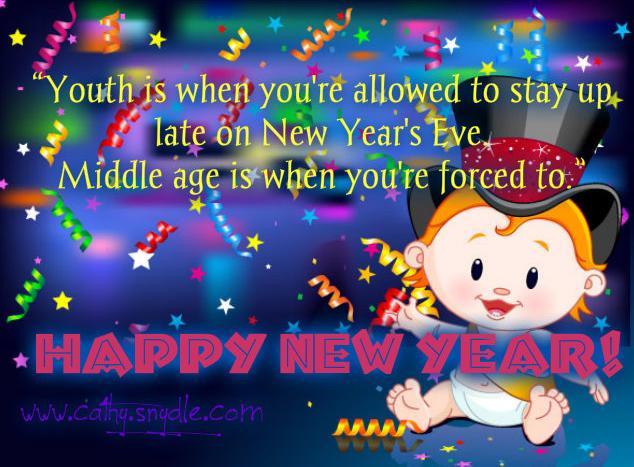 “You staying home all alone on New Year’s Eve? Unthinkable. Take my advice … the countdown should be shared with someone, or it’s just another set of numbers passing you by.” – E.A. Bucchianeri

“A new year brings not only happiness, it makes us happy with a hope to fulfill our dreamz or a new beginning of our life. So, a new year is very special to everyone.” – Santonu Kumar Dhar

“I would say happy new year but it’s not happy; it’s exactly the same as last year except colder. ” – Robert Clark

Smiles from the threshold of the year to come,

Whispering ‘it will be happier’…” – Alfred Tennyson

“New Year’s eve is like every other night; there is no pause in the march of the universe, no breathless moment of silence among created things that the passage of another twelve months may be noted; and yet no man has quite the same thoughts this evening that come with the coming of darkness on other nights.” – Hamilton Wright Mabie

“Each age has deemed the new-born year 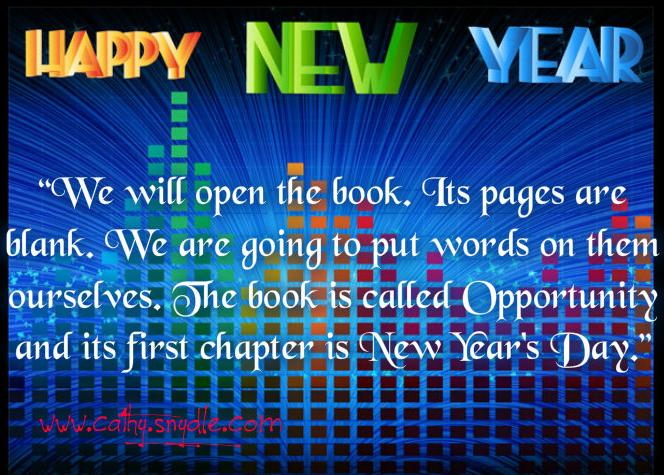 “We will open the book. Its pages are blank. We are going to put words on them ourselves. The book is called Opportunity and its first chapter is New Year’s Day.” – Edith Lovejoy Pierce 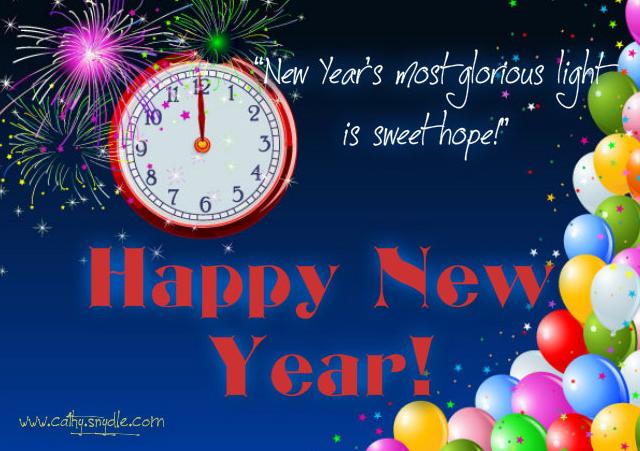 “One resolution I have made, and try always to keep, is this:  To rise above the little things.” – John Burroughs

“No one ever regarded the First of January with indifference.  It is that from which all date their time, and count upon what is left.  It is the nativity of our common Adam.” – Charles Lamb

“Yesterday, everybody smoked his last cigar, took his last drink and swore his last oath.  Today, we are a pious and exemplary community.  Thirty days from now, we shall have cast our reformation to the winds and gone to cutting our ancient shortcomings considerably shorter than ever.” – Mark Twain

“A merry Christmas to everybody! A happy New Year to the world!” – Charles Dickens

Happy New Year To All