The Philippines has a lot of fiestas as every town and the city has a fiestas of their own and most of the time these celebration honor a saint or celebrate the passage of the seasons.

Fiesta is a part of the Philippine culture. The roots go back as far as the Spanish era when the Spaniards first introduced Christianity. Today, being a Roman Catholic country fiesta are celebrated yearly in many cities and towns, so it’s not surprising that there is a festival or celebration going on somewhere. After all, for many Filipinos, fiestas are a way to make amends for past mistakes, to be thankful for a good year and just a time to be merry. Take note, Pinoys always celebrate fiestas with lavish foods and free flowing beers if they can afford it!

The following are list of the Popular Philippine fiestas that you should check out, whether you are filipino or foreign tourist. 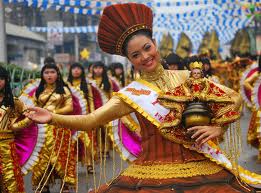 Sinulog festival is an annual event in Cebu, a big event for the month of January for the Cebuano’s. The festival celebrates and honors Cebu’s patron saint, the Santo Nino, and Pinoys acceptance of Catholicism.  Sinulog is held on the third week (Sunday) of January and last for 9 days, with the grand parade to culminate the event. 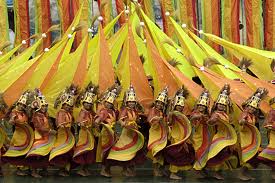 The celebration features a street parade with participants dancing in the street wearing colorful costumes. By the way, before the grand parade a Fluvial procession is first held the day before the parade at dawn, wherein the statue of the Santo Nino carried from Mandaue city to the Basilica. In the afternoon, a procession that last for hours takes place along Cebu’s main streets. 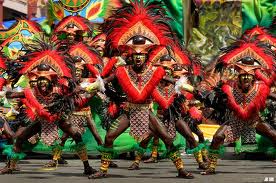 Ati-Atihan festival honors the Santo Nino, the patron saint of Kalibo, Aklan. The celebration last for 3 days, wherein street dancing (tribal dance), exceptional costumes with weapons, and loud rhythm of the drums is part of the event. Take note, the ati-atihan is comparable to Brazil, Rio Carnival.

The celebration is held on Kalibo, a province of Panay island in Visayas.  The religious festivals honor not just the patron saint but also the local people of Panay, the Aetas the primary settlers of the islands.

Famous Festivals in the Philippines 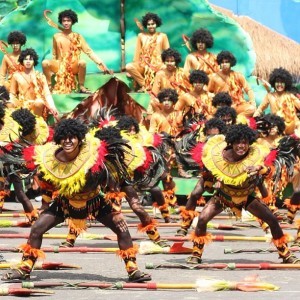 The Dinagyang festival occurs right after the Sinulog and Ati-Atihan festivals. So, if you missed attending Cebu and Kalibo fiesta, Iloilo religious festival is held on the 4th Sunday of January. 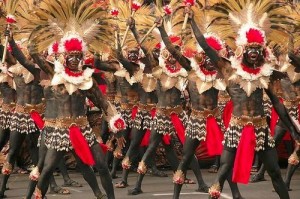 The Dinagyang festival is a major cultural event in the city of Iloilo, and despite the fact that this festival is inspired from the Ati-Atihan, the Dinagyang is still different since it also celebrates the good bounties from the creator. Plus, the parade is filled with grace and color.

Panagbenga festival (Flower Festival) is a month long event. The flower festival is held on February, in the summer capital of the Philippines. Baguio city blooms during the month of February as the festival include a float parade, wherein the floats are decorated with different kinds of flowers found in Baguio.

Aside from the float parade, street dancing with dancers clad in costumes made of flower is also the highlights of the festival. People from Manila, nearby provinces and foreign tourists visit Baguio to witness and participate in the festival.

Popular Festivals in the Philippines 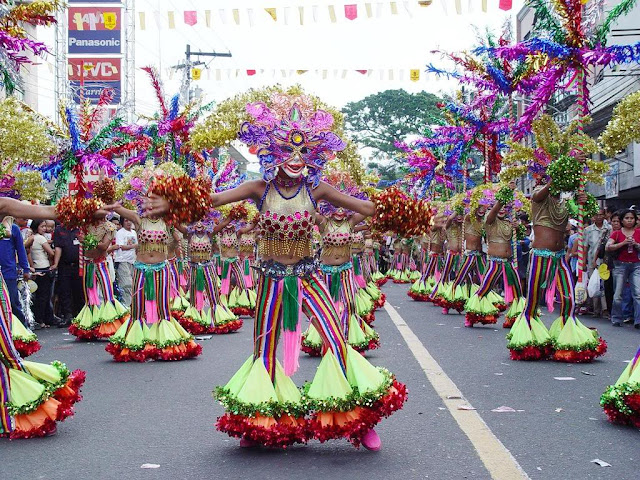 Maskara Festival is held on the 3rd week of October in Bacolod city. The festival always features street dancing with participants wearing smiling mascaras while dancing to the different music. Other activities include in the festival are the Masskara Queen pageant, the Drum and Bugle competitions, food festivals and specials events that change every year.

Sandugo Festival is an annual historical event in Tagbilaran, Bohol. The festival commemorates the “Treaty of Friendship” between the Spanish conquistador and chieftain of Bohol.

The event is held on the first day of July, every year. It is a month long festival, with motorcade, holy mass, beauty pageant and the popular Sandugo Street Dancing Competition usually held on the 3rd or 4th Sunday of the month.

The street dancing competition often participated by the municipal government, schools and organizations in here and abroad. The competitions usually start at the city Pier and ends in the Pres. Carlos Garcia Sports Complex, wherein the re-enactment of the Sandugo is played. 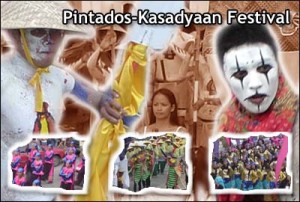 Pintados Festival is a religious and cultural celebration in Tacloban. The festival was formed to honor the patron saint Sr. Santo Nino in 1986. After a few years, the festival merges with Kasadyaan Festival, which is held on June 29. Now, the event is called Pintados Kasadyaan Festival.

Kinds of Festivals in the Philippines

Moriones is a festival held on Holy Week, so this festival is more solemn compared to the other festival in the Philippines like the Ati-Atihan. The people of Marinduque made the holy week even more special by the festivity especially when a few men and women wear masks and costumes that replicate the soldiers on the bible.

Morion simply means a “visor” or “mask,” a part of the armor of the Roman soldier in medieval times, while Moriones refers to the costumed and masked penitents who walk or march around the town for seven days searching for the Longinus. In Marinduque, Morions parade the streets from Holy Week to Sunday (Easter) to surprise the locals and scare kids.

From the towns of Gasan, Boac, Buenavista, Santo Cruz to Mogpog, the island become a stage for the participants. Also, there are various activities during the holy week such as the Pabasa, unique tradition of the Filipino people then the Santo Sepulcro is also observed on Good Friday, but the highlights of the festival are the reenactment of Christ suffering, it is called the Via Crucis. Men participating in the Via Crucis are whipped on the back, carry a wooden cross, and are crucified at times. 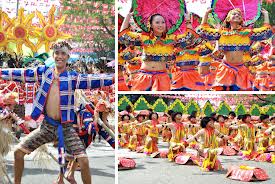 Kadayawan Festival in Davao is an annual festival.  The name of the festival derives from the greeting “Madayaw” or “Dayaw” a dabawenyo word, which means valuable, beautiful, and good.

The Kadayawan festival is a thanksgiving for the bountiful harvest, wealth, serenity, and life. Take note, the “Pahinungod” or Thanksgiving despite today’s modernity is still practiced by the local people or Davaoenos, and the tradition evolved into a major annual event in Davao called the kadayawan festival.

Religious Festivals in the Philippines 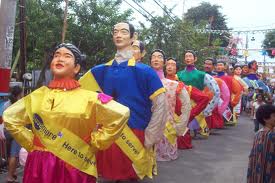 Higantes festival is an annual event in the municipality of Angono, province of Rizal. The “Arts Capital of the Philippines” is the stage for the traditional Higantes festival, participated by the local barangay.

By the way, the Higantes are actually made of paper mache, measuring 4 to 5 feet wide, and 10 to 12 feet in height.

In Honor of A Patron Saint