Philippine is renowned for its hospitality, friendly people, close family ties, great beaches, and affinity for celebration. The Philippine is a country that has fiestas in different cities and towns to honor the local patron saint, for thanksgiving and to showcase their main products, which is why it is no longer surprising that monthly there is a celebration somewhere.

That’s right, you read it right, Pinoys create fiestas to celebrate the region main produce and not just the patron saint, simply because aside from celebrating we also enjoy eating good food. Take note, Filipino cuisine are not as popular as the Thai or Vietnamese foods, but the country has excellent dishes that can compete with its Asian neighbors.

In fact, each region from Luzon, Visayas and Mindanao has something unique and delectable to offer, especially to those who are interested in good food at an affordable price.

So, if you are a foreigner visiting the Philippines for the first time, or a local looking for a place to spend your holiday, keep in mind that there is more to the 7,101 islands than the beach. Come to think of it! You just have to open your eyes to the other things that the Philippines has to offer to discover the truth that you can have a great time without hitting the beach and dieting to fit into a swimsuit.

The following are list of the food festivals is in the Philippines that you can check out on your next holiday or a road trip with friends. 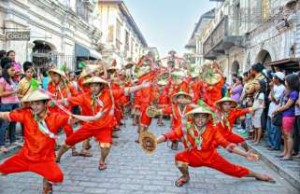 Longganisa festival is held every 25 of January, in the city of Vigan. This festival is not as popular as the Sinulog or Ati-Atihan and other festivals but it attracted foreign and local tourists every year. The street festival features dancing competitions and longganisa cooking contests.

By the way, Vigan is well known for it’s larger than usual empanada filled with longganisa and Unesco world heritage Spanish era homes along Crisologo street. Vigan is the capital of Ilocos Sur, a popular tourist destination because of its museums, houses and other landmarks built during the Spanish period. 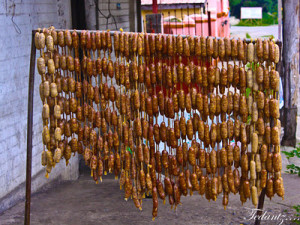 The unique architecture and distinctive features of Vigan are another reason why you should attend the next Vigan Festival, which also coincided with the city fiesta (in honor of San Pablo) and the anniversary of Vigan cityhood.

Pahiyas Festival is held every 15th of May in Lucban, Quezon. The festivity honors the patron saint of farmers, St. Isidore the Labourer. The street festival showcases the houses adorned with vegetables, fruits, handcrafts, kiping and other agricultural products of Quezon. Every year, foreign and local tourists roam the streets were houses decorated with foods that can be eaten after the festival.

Lucban is a second-class municipality in Quezon, Philippines. It is also the home of the famous Mt. Banahaw and beautiful handicrafts.

Parada ng Lechon is held every 24th of June in Balayan, Batangas. The festival is a celebration to honor the feast of St. John the Baptist. 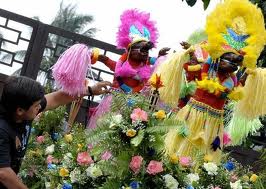 Lechon or roasted pig is a staple in every Filipino occasions from birthdays to weddings especially during fiestas. The lechon in Balayan during the festivals are dressed up in different costumes then paraded around the towns. After the parade, participants bring home their lechon so families, friends, and neighbors can eat and partake of the delicious roasted pig. 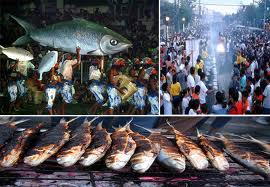 Bangus festival is held every month of April. In 2002, the first festival was celebrated to promote the city’s main produce, which is bangus. Today, the festival is part of Pangasinan attractions and promotion to set Dagupan, the home of the delicious bonuan Bangus to be the Bangus capital of the world. The festival features a grilling challenge, bangus eating contest, cooking contest and Bangusan Street party, wherein bands performed in the street.

By the way, the Guinness Book of World Records gives the title to Dagupan for longest barbeque in 2003. 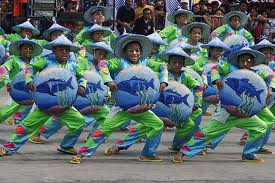 The tuna festival is an annual week long affair in General Santos city, the home of the best tuna in the world.

Tuna is the main produce of the city, its primary source of income. So, its no longer surprising that a fiesta is created to promote its tuna and the city not just to the Filipinos but the entire world.

Take note, General Santos city exported to various countries including US, Europe and Japan. In fact, the Philippines is the largest exporters of sashimi-sushi grade tuna to Europe, North America and Japan. The country’s six canneries are all based in Gensan.

Lansones festival is a celebration of thanksgiving for a bountiful harvest in Camiguin island. The festival is held annually, on the 3rd week of October in the town of Mambajao.

Camiguin is well known as the home of the sweetest lanzones, and the sources of fruit in the north central, Mindanao. Foreign and local tourists visit camiguin during the harvest season to participate in the weeklong festivals wherein street dancing, product exhibits, parade and beauty pageants are part of the event.

Alimango Festival is a celebration to promote the town’s major produce. The festival is held every 22nd of March, in Lanao Del Norte.

Alimango is a symbol of unity among Muslims, Lumads and Christians, which is why this festival is very important to the people of Lanao Del Norte, particularly in the Lala 27 barangays.

Suman Festival is held on February 14. The festival is the grandest celebration in Baler, Aurora since it promotes the native delicacy of the province. The weeklong festival is marked by float parade, home decoration contest wherein the homes decked with suman, and trade fairs as well as beauty pageants.

Suman is a Filipino steamed rice cake, house in a bagakay a special kind of bamboo.

Kesong puti is Santa Cruz, Laguna main product, which is why the province honors it by creating a festival. The Kesong Puti Festival is held on April 1st, with different activities such as the food festival, trade fair, street dancing, cultural shows, beauty pageant and painting contest. The highlight of the festival is the kesong puti, made from fermented carabao milk and wrapped in banana leaves.

Dinagat Festival originally highlights the fishing culture and livelihood of the Cordovanhons. But years later, the festival is held to promote Cordova rich marine resource, the Bakasi or Cordova eel.

The festival is held every 15th of August, in Cordova, Cebu. The festival features a cooking contest and bakasi race, a dance that replicates the eel.

Garlic or Bawang is a staple in Philippine food since it is the flavor base for Filipino dishes.

In Sinait, Ilocos Sur, the province celebrate the Bawang festival every May 1st to promote Sinait as the garlic capital of the North. The festival showcases the hardwork, ingenuity and talent of Ilocano farmers.

The festival is a big event in Ilocos Sur, wherein the festivity includes the garlic contest, the selection of “Ms. Garlic festival” and street dancing competition.

Guimaras is the mango capital of the Philippines. The county is well known all over the world as the producer of the most sweetest and delicious mangoes. 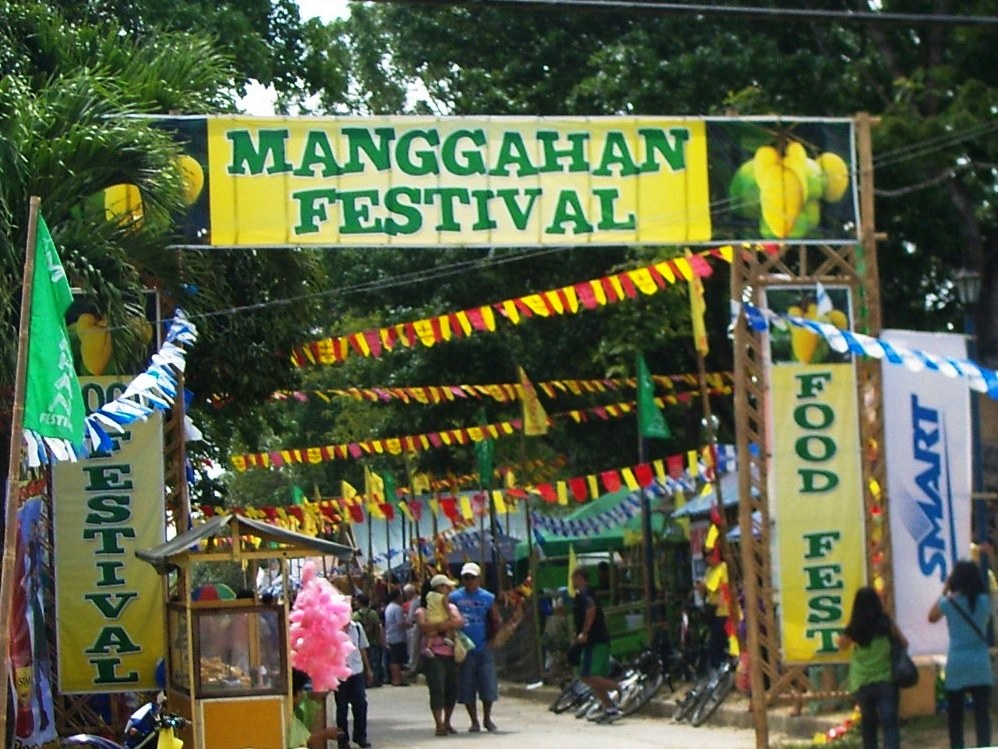 The Mangahan Festival is held every 15th of April to celebrate the province independence, showcased the historical heritage and culture of Guimaras as well as promote the Philippine mango.

Pateros is home of the famous balot, an exotic Filipino food. Balot is a fertilized duck egg, boiled and eaten with a salt or vinegar.

A lot of people find balot a bit extreme not because of its taste but because of the sight of a developing chicken or embryo, which must be eaten. Balot sa Puti Festival is a held every 31st of January, in Pateros.

Tinapay Festival is held on the 2nd week of February, a celebration showcasing the town different breads of bakers in Cuenca and promoting the bread making industry. The festival also honors the patron saint of “Our Lady of Peace and Good Voyage” for a good life. 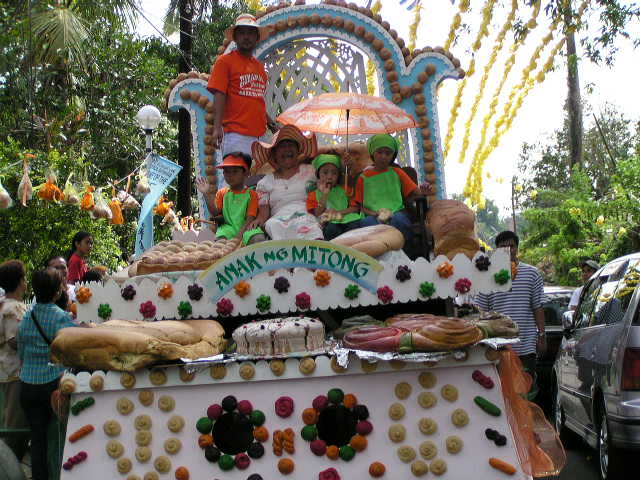 The festival is a big event in Cuenca, Batangas as the festivity include a float parade wherein the floats decorated with breads that local and tourists can eat later.

Banana Festival is held on the first week of July, the founding of Davao Del Norte. The festival is celebrated to promote the province’s #1 export and major produce, the bananas.