The Philippine cuisine varied from one region to another, with each region offering a unique taste and experience. Travellers visiting the country for the first time will be amazed as the different provinces throughout the Philippine have something different to offer, which will certainly make the visit memorable as the mixed cuisine is the result of the country rich and colorful history, various ethnic groups, and geographical locations. If you are wondering about Filipino foods, then this article can help you as I have discussed the foods from the different regions, so read on. 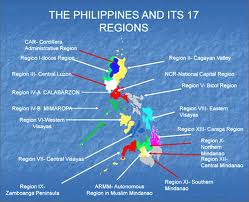 The Philippine archipelago consists of 7, 101 islands that have been categorized into three geographical divisions the Luzon, Visayas and Mindanao, with Luzon as the largest. The Philippine being a tropical country, have been endowed with rich natural resources, so there is a wide variety of fishes, fruits and vegetables in the country to create a wide range of delicious dishes.

Luzon comprised of the northernmost region is the political and economic center of the Philippines. The capital of the country, which is Manila, is also located in Luzon. The northern cuisine from region 1 to the national capital region even if unrecognizable is a welcome delight for the foreign and local tourists as the flavours throughout the archipelago when combined can tantalize even the most sensitive tastebuds.

In the Philippines, you can find dishes from across the world, but the foods prepared to suit the Filipino palate, so don’t surprised. Anyway, if you plan to eat your way across the Philippines 7,101 islands from north to south then this article can help you.

If you are travelling to the Philippines, it is commendable to try the different foods that each region offering  from north to south of the Philippines to understand Filipinos. So, let say, you do decide to backpack around the country, the best place to start your food journey is in region I, the northern part of Luzon.

You see, Ilocos region cuisine is heavy in freshwater fish and steamed or boiled veggies. The most popular food in the province, consisting of mixed veggies flavored with fermented fish or bagoong rather than the usual salt. It is an Ilocano delicacy, called pinakbet.

Aside from the vegetable dish, Ilocos is also known across the country for bagnet, a deep fried pork with the skin still intact, like chicharon. Plus, there is also the notorious Ilocano empanada, a Filipino snack is great with ilokano suka.

In central Luzon, kapampangan cuisine is well known in the country especially a dish called Sisig, made from the different parts of the pig’s liver, and head then soaked in vinegar and seasoned with chili and calamansi. The popularity and awesomeness of the dish is also the reason why there is an annual Sisig Festival every December in Pampanga.

Aside from Sisig, other Pampanga foods that you should not ignore when in the area are longganisa, a spicy and sweet sausage, calderetang kambing or goat stew, a favorite pulutan made of goat and Tocino, a sweetened cured pig. By the way, in Calasiao, Pangasinan, a steamed rice cake popularly known as puto is a local favorite.

Since you will be passing by Bulacan whether you are going to the northernmost part of the country or to Manila, it is best to stop by the province for Filipino kakakanin such as sapin sapin, ube halaya, cassava cake and other sweet treats. Take note, Bulacan is the center for desserts or panghimagas, so you can easily find something that satisfy your craving for kakanin.

On the Southernmost part of Luzon, the  Calabarzon region (Cavite, Laguna, Batangas, Rizal and Quezon) also worth checking out as these provinces have a lot to offer travel foodies. Take note, the Calabarzon region  native delicacies, freshwater fish, special coffee, and a plethora of gastronomic treats can make your visit to the Philippines even more exciting. Let start our journey in Cavite, since if you are coming from Manila and heading to Quezon, it is the first province you will be passing by unless of course you take a short cut via Sta.Rosa to Tagaytay then you will be skipping Cavite.

Anyway, in case you are taking the long route, then your first stop over is Cavite, the smallest province in Calabarzon. Cavite is the best place to buy inexpensive tahong since it is close to Manila Bay. Aside from Tahong and being the birthplace of Philippine Independence, the province is also home to a Filipino classic dish called “Tamales.”

Next stopover is the province of Laguna, since you can find lots of buko pies and panutsa, a good pasalubong to friends and families then Batangas, is a popular summer destination in the Philippines. The provinces of Laguna and Cavite in the north, and then Quezon to the east border Batangas.

Batangas is the home of the smallest volcano, Taal Lake and the smallest freshwater fish called Tawilis, a local delicacy. Aside from Tawilis, Batangas is also known for its Bulalo soup, a beef dish made of marrow bones and beef shanks. It is also the home of kapeng barako, a special coffee considered at far with the world’s best because of its strong and delicious taste. 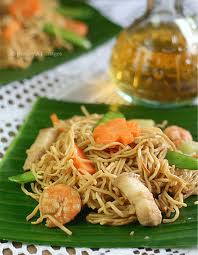 After your Batangas stopover, proceed to Quezon province. By the way, Quezon is a 3-hour drive from Manila, and sad to say underrated and overlooked despite the fact that it is home to Lambanog, a strong alcoholic drink that is very cheap. Quezon is also the home of Lucban longanisa, a sausage made with lots of local garlic, making it one of the best sausages in the country in taste and aroma. But of course, your visit to Quezon is not complete without trying their famous pancit habhab served in banana leaf and eaten sans the utensils and Budin, a local name for cassava cake.

If you are going back to Manila, rather than take the same route, it is best to take the road that lead to Antipolo city, the capital of Rizal. Take note, you can drive straight from Real, Quezon to the province of Rizal, just follow the route to Teresa, Rizal. Teresa is a town that many motorists used to get to Morong, Tanay, Laguna, and Quezon province if they want to avoid traffic.

Antipolo City, the largest city in Calabarzon region is the capital of Rizal province. Antipolo is a popular pilgrimage site, made even more famous because of their local products like suman and cashew nuts.

Now, if you want to head further south of Luzon than go back to Manila, the province of Bicol is a great stopover to get a taste of Laing, a bicolano delicacy that will leave you hot and sweating because of the dish extreme spiciness. Take note, authentic laing is very hot but extremely delicious. 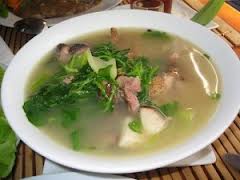 Oh! Before I forgot, when in the northern part of Luzon, before you head back to Manila, I highly recommend that you also visit Sagada, Mountain province to try the delicious chicken dish called Pinikpikan, a native dish that is brutally prepared. I say, brutally, simply because the chicken first beaten to death with a stick to make the blood flow to the surface and to heighten the meat flavor.

The Philippine cuisine is definitely a mixture of traditions, ethnic groups, and the way of life. So, sampling as many of the Filipino dishes can surely help you understand Filipino culture.

For recipes of laing, pancit habhab, and other filipino foods just visit my post on Filipino Pancit Recipe .

By the way, this is a tribute to the coming Philippine Independence day (June 12), which also happens to be my mom’s 60th birthday.

On the my next post, the second part of my three-part article, I will be discussing the Filipino foods found in Visayas.