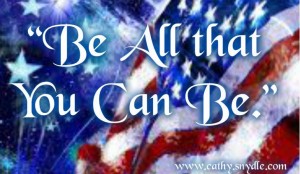 On July 4, 1776, the Continental Congress approved the Declaration of the Independence. All Americans celebrate the historical day every year wherever they are in the world with great fanfare.

America severed its ties to the British monarchy completely on the fourth of July. The momentous occasions are remembered to honor the suffering of the forefathers who fought valiantly to gain freedom. If you wish to honor your ancestors or be thankful for your freedom, this coming 4th of July, why not send a quote to your friends, family members living abroad, and other people you wish to greet this coming holiday. 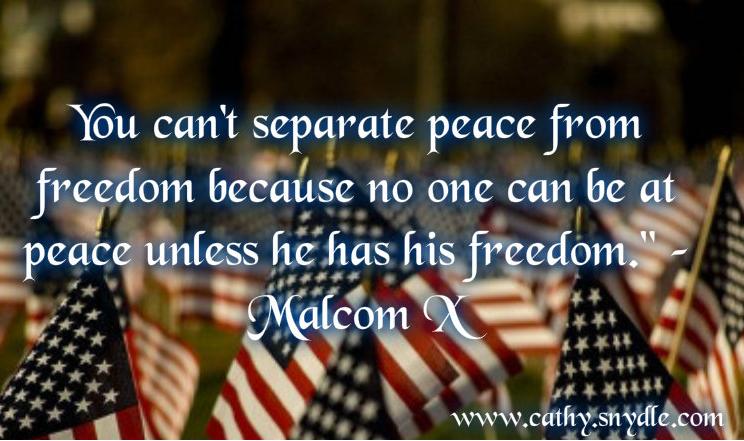 “If we are free from attachment, we can easily recognize ourselves in other people, in different forms of manifestation, and then we don’t have to suffer.”

“Liberty, taking the word in its concrete sense, consists in the ability to choose.”

“Our greatest happiness does not depend on the condition of life in which chance has placed us, but is always the result of a good conscience, good health, occupation, and freedom in all just pursuits.”

“Freedom is never dear at any price. It is the breath of life. What would a man not pay for living?”

“Freedom is the oxygen of the soul.”

“I’m Proud to Be an American, where at least I know I’m free “

“Courage: the state or quality of mind or spirit that enables one to face danger or fear with self-possession, confidence, and resolution. Bravery.”

“The future belongs to those who believe in the beauty of their dreams.”

“The only thing required for evil to triumph is for good men to do nothing.”

“Patriot: a person who loves, supports, and defends his or her country and its interests with devotion.”

Many Americans are overwhelm with the feeling of pride every 4th of July as the holiday is more than just about great barbeque parties but a day that America becomes free. If you are feeling lucky to living in the land of the free, do not worry because you are not alone.

So, inspire others especially the younger generation to appreciate their freedom by sharing patriotic quotes. 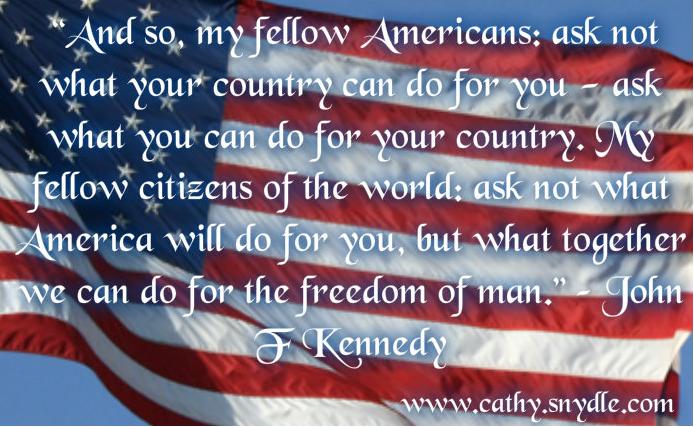 “America, for me, has been the pursuit and catching of happiness.” – Aurora Raigne

“America is a tune. It must be sung together.”- Gerald Stanley Lee

“And I’m proud to be an American, where at least I know I’m free. And I won’t forget the men who died, who gave that right to me.” – Lee Greenwood

“One flag, one land, one heart, one hand, One Nation evermore!”- Oliver Wendell Homes

“Let every nation know, whether it wishes us well or ill, we shall pay any price, bear any burden, meet any hardship, support any friend, oppose any foe, to assure the survival and success of liberty.” – John F. Kennedy

“Four score and seven years ago our fathers brought forth on this continent a new nation, conceived in liberty, and dedicated to the proposition that all men are created equal.” – Abraham Lincoln, The Gettysburg Address, 1863

The following are great poems that you can share with your friends and loved ones while barbequing at your backyard this coming fourth of July. 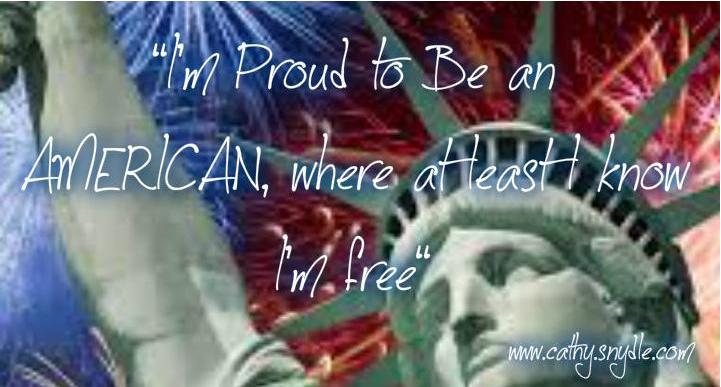 “In a chariot of light from the region of the day,
The Goddess of Liberty came
She brought in her hand as a pledge of her love,
The plant she named Liberty Tree.” – Thomas Paine

This 4th of July, before you throw the biggest barbeque party and have a good time enjoying your freedom with friends, neighbors and loved ones why not step back, and appreciate the day. Below are some of the quotes that you can share to inspire others to remember why every July fourth America celebrates the day. 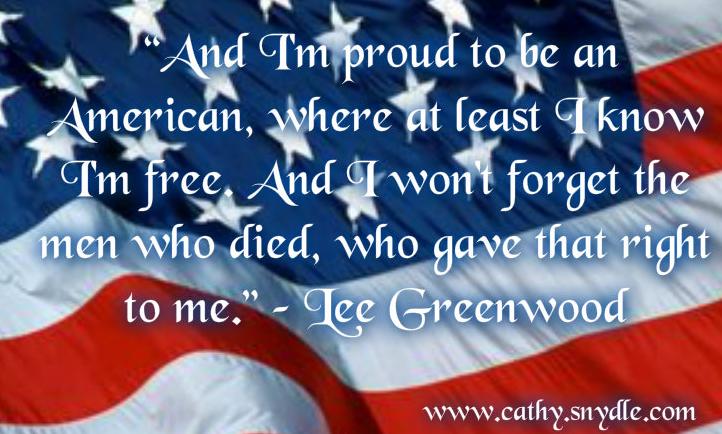 “A man’s feet should be planted in his country, but his eyes should survey the world.” – George Santayana

“You have to love a nation that celebrates its independence every July 4, not with a parade of guns, tanks, and soldiers who file by the White House in a show of strength and muscle, but with family picnics where kids throw Frisbees, the potato salad gets iffy, and the flies die from happiness. You may think you have overeaten, but it is patriotism.” – Erma Bombeck

“Those who expect to reap the blessings of freedom, must, like men,
undergo the fatigue of supporting it.” – Thomas Paine

“America is much more than a geographical fact. It is a political and moral fact – the first community in which men set out in principle to institutionalize freedom, responsible government, and human equality.” – Adlai Stevenson

“He that would make his own liberty secure, must guard even his enemy from opposition; for if he violates this duty he establishes a precedent that will reach himself.” – Thomas Paine

“This nation will remain the land of the free only so long as it is the home of the brave.” – Elmer Davis

“The American Revolution was a beginning, not a consummation.” – Woodrow Wilson

“Liberty is always dangerous, but it is the safest thing we have.” – Harry Emerson Fosdick

“For what avail the plough or sail, or land or life, if freedom fail?” – Ralph Waldo Emerson

“May the sun in his course visit no land more free, more happy, more lovely, than this our own country!” – Daniel Webster

“The United States is the only country with a known birthday.” – James G. Blaine

“How often we fail to realize our good fortune in living in a country where happiness is more than a lack of tragedy.” – Paul Sweeney

“We need an America with the wisdom of experience. But we must not let America grow old in spirit.” – Hubert H. Humphrey

“A man’s feet must be planted in his country, but his eyes should survey the world.” – George Santayana

“A real patriot is the fellow who gets a parking ticket and rejoices that the system works.” – Bill Vaughan

“All men profess honesty as long as they can. To believe all men honest would be folly. To believe none so is something worse.” – John Quincy Adams

“Then join hand in hand, brave Americans all!
By uniting we stand, by dividing we fall.” – John Dickinson

“We must be free not because we claim freedom, but because we practice it.” – William Faulkner

“Where liberty dwells, there is my country.” – Benjamin Franklin

“The winds that blow through the wide sky in these mounts, the winds that sweep from Canada to Mexico, from the Pacific to the Atlantic – have always blown on free men.” – Franklin D. Roosevelt

“This nation will remain the land of the free, only so long as it is the home of the brave.” – Elmer Davis

“Where liberty dwells, there is my country.”- Benjamin Franklin

“All we have of freedom, all we use or know, this our fathers bought for us, long long ago.”- Rudyard Kipling

“All the great things are simple, and many can be expressed in a single word: freedom; justice; honor, mercy; duty; hope.” – Sir Winston Churchill

“The difficult we do immediately. The impossible takes a little bit longer.” – U.S. Navy Seabees

“If a man does his best, what else is there?” – George Patton

“The true test of character is not how much we know how to do, but how we behave when we don’t know what to do.” – John Holt

“Life without liberty is like a body without spirit.” – Kahlil Gibran

“Nothing is so strong as gentleness, and nothing is so gentle as real strength.” – Ralph W. Sockman

“You have freedom when you’re easy in your harness.” – Robert Frost

“Everything that is really great and inspiring is created by the individual who can labor in freedom.”- Albert Einstein
You can’t separate peace from freedom because no one can be at peace unless he has his freedom.” – Malcom X

“This, then, is the state of the union: free and restless, growing and full of hope. So it was in the beginning. So it shall always be, while God is willing, and we are strong enough to keep the faith.”- Lyndon B Johnson

“For what avail the plough or sail, or land or life, if freedom fail?”- Ralph Waldo Emerson

“Only our individual faith in freedom can keep us free.” – Dwight D. Eisenhower

“Freedom is nothing else but a chance to be better.”- Albert Camus

“In the process of gaining our rightful place, we must not be guilty of wrongful deeds. Let us not seek to satisfy our thirst for freedom by drinking from the cup of bitterness and hatred. We must forever conduct our struggle on the high plane of dignity and discipline.” – Martin Luther King, Jr.