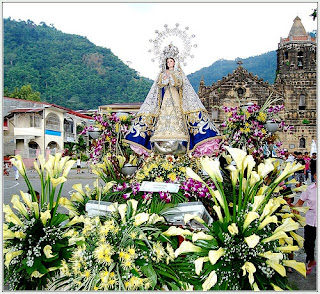 Are you wondering about why during the month of May there are Santacruzan in different cities and towns across the country? The month of May for those who don’t know is the month of Flores de Mayo or Flowers of May, an annual catholic festival held in the Philippines that last for a month.

Flores de Mayo is a festival that honor the Virgin May and Santacruzan are the pageant held to honor Reyna Elena aka Helena and Constantine, on the last day of celebration. Filipinos celebrate the festival during the month of May, since the mid 1800s when Vatican proclaimed the Immaculate Conception. The Blessed Virgin was offered flowers, hence the name Flores de Mayo or Flores de Maria. By the way, the Spaniards introduces more than just the Catholicism but faith that resulted in numerous religious festivities.

Anyway, flores de mayo is celebrated to honor the finding of the cross by Queen Helena (St. Helena) the mother of Constantine the great, the first Christian emperor. Story goes or as the history tells us, 300 years after the death of Jesus Christ, the Queen (Helena) search for the true cross and at the Calvary, at the age of 75 she has found the 3 crosses.

Her son Constantine, appointed his mother as Augusta Imperatrix to give her unlimited access to the treasury since it’s Queen Helena’s mission to find the relics of Christian tradition. So, Helena traveled to the Holy places to locate the whereabouts of the relics, the infamous holy cross of Jesus Christ.

When the 3 crosses were found, Queen Helena asked her sick servants to touch the crosses and after touching one of the crosses, the servants who were sick according to legend were healed miraculously. The cross that healed the servant was said to be the cross of Jesus and because of her discovery and contribution to the Catholic Church, she was proclaimed as a saint, and her discovery is celebrated in the Philippines in the form of Santacruzan.

Sara ng Krus or Santacruzan often starts with a novena prayer for the Virgin Mary. The rosary prayer is done every night, prior to the procession until the 9th day, the day of the Santacruzan. In the Philippines, the Virgin Mary was passed from one house to another for 9 days, so devotees can pray the salve.

In the morning of the Santacruzan, after the holy mass there are Filipinos games then in the evening, the beautiful maidens also known as Sagalas wore their finest gowns and paraded around town. The event organizer, usually the barangay captain, selected the maidens. The procession is a bit tiring as women and their escorts have to walk around town in the old days, but nowadays most just ride in a float especially if the procession is longer. Take note, the order of arrangement is often according to the age, height, and beauty and of course, the most beautiful woman holds the title of Reyna Emperatriz, and she is the one that carries the small cross.

Keep in mind that Flores de Mayo is celebrated differently in every region, like in Bicol the festival is held every Saturday and Wednesday of May. Nevertheless, the Santacruzan is still held on the last day of the festival, wherever in the country. The sagala is the most colourful facet of the festival as most of the time the Sagalas were beautiful and sometimes, TV personalities get invited to play the part of Reyna Elena and other character in the procession.

Characters in The Santacruzan

The above characters are part of the procession, along with a local band that played Hail Mary. The devotees who joined the procession also carries candles, pray and sings while walking.