Halloween is a festival celebrated on all four corners of the world, from North America to Europe and Asia. An annual event referred to as “All Hollows Day” and celebrated every 31st of October. It is the second most popular holiday in America, even though the occasion honors the spirits and supernatural creatures.

The Samhain started Halloween festival according to legend, hundred years ago. They performed rituals honoring the dead to appease and avert possible destruction cause by the disembodied spirits intermingling with the living. The people would also wear ghoulish costumes to prevent the spirits from finding them. The Halloween traditions and customs practiced ages ago every Samhain festival was adapted and introduced by Irish and Scottish immigrants who migrated to America and other countries. Today, Christians and non-Christian all over the world celebrate Halloween, but the traditions and rituals vary from country to country. So, it is not surprising to know that other countries celebrating the most spookiest time of the year, do so in their own way, and this article discusses these Halloween traditions around the world.

Halloween Traditions Around The world

The examples below show how people celebrate Halloween around the world. The information compiled to give you an idea on how to welcome the souls of the dead when in America, Japan, China, Germany, and Philippines.

In America, people celebrate the Halloween festival with excitement and fun fare. Americans spends millions of dollars a year decorating their houses with scarecrows, Jack-o-lanterns, witches, spiders and other Halloween decorations. They also spend a great deal on candy for treat-or-treating and costumes.

By the way, it wasn’t until the 20th century that Halloween is a major holiday. In fact, the Irish immigrants brought Halloween festival to America in 1840, but it was not until 1921 that the country celebrated it officially and annually. From thereon, Americans celebrate the festival with enthusiasm to pay tribute to the souls of the dead who visit their living relatives every 31st of October when it is believed that the boundary separating the spirit world and the living world is weak. Today, Halloween is a communal celebration and no longer a religious festival, the over commercialization of the festival is evident of this fact.

Children and adults wore ghoulish costumes to observe the tradition of trick-or-treat and of course to party. They dressed up as goblins, pirates, vampire, princesses and other supernatural creature, probably why Halloween is the second most successful commercial holidays in America.

A pumpkin Carving In America 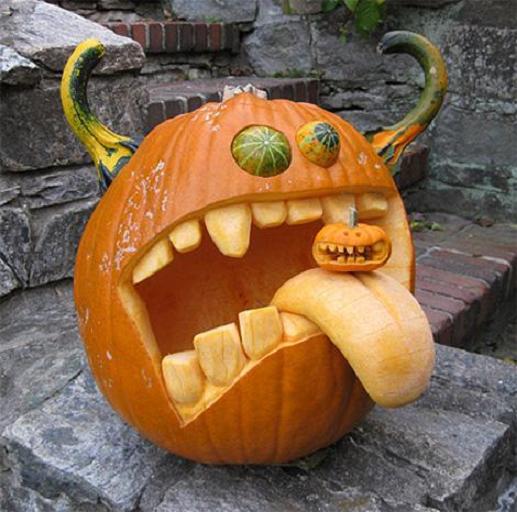 The Japanese celebrate Halloween from July 13 to 15, August 15 or the 15th of the lunar month. They celebrate on O-Bon day because Halloween arrived very late in Japan. The O-Bon festival also celebrated to honor the departed souls and to lead the spirits to back to earth. Furthermore, unlike the western festival, the spirits are not angry according to the Japanese belief but just want to be with their relatives, so the people celebrate not to appease the dead but to welcome them. That’s why, the people on O-Bon festival light lanterns and have bonfires.

By the way, the western style celebration of Halloween as said awhile ago arrived only recently and popular in areas such as Kobe and Osaka as well as places like Universal Studios and Disneyland. They also started wearing costumes and celebrating in October and separately from O-Bon festival just last year, wherein about 1700 people join the Halloween festival.

Halloween Around the World

The following are some of the country that celebrates Halloween traditions to honor the dead.

The Austrians celebrate Halloween to welcome the dead and part of their tradition is leaving bread and lamp for the dead before sleeping at night. This Halloween tradition started around the 90s including wearing spooky costumes. Little children and students dress up yearly for small parades and for Halloween parties.

In Canada, the people celebrate Halloween with pomp just like in America. They also observed Halloween activities such as costume parties, trick-or-treat and visiting spooky attractions. Other activities enjoyed by both kids and adults are watching horror movies, reading horror books, ghosts storytelling and playing Halloween games. This festival is also not a public holiday like in America, so the people stick to their routines and chores during the day and have fun at night.

Italians celebrate halloween as All Saints Day, so the celebration is not as pompous and grand like in the United States. In fact, every Italian household have a feast while preparing a special cake called Ossa dei Morti also known as “Beans of the Dead,” an indispensable part of the Italian celebration of Halloween. After preparing the cake, they put it on the top of the table then everyone leaves for the church living the door open. Some Italian families still observed the cake rituals to keep the spirit happy.

Image Source
Some families also visit the grave to clean their loved ones tomb, offer wreaths, flowers, and candles to show respect for their relatives’ soul. Take note, in Italy Halloween is more popular with adults than children unlike again in the United States when kids rule on Halloween day.

In Philippines, Halloween is celebrated western style, but in some part of the country only like Metro Manila, Cebu, Davao, and other provinces. The Halloween celebration is also not as pomp and grand like in western countries, and most of the time only families belonging to the upper class society observed the Halloween traditions.

Come to think of it! Most of the well to do individuals and families celebrate Halloween as a large percentage of the lower and Middle class families does not even bother with Halloween as they are more inclined to celebrate All Saints Day on November 1.

Halloween in Spain is a three-day affair, starting on October 31. The first day is called “Day of the Witches” or “Dia de Las Brujas” but in North West region of Galicia, it is called “Night of the Pumpkins” or Noite dos Calacus in Spanish. The next day, the people celebrate Dia de Todos Los Santos then the Dia de Los Muertos also known as All Souls Day. The three-day event is referred as El Dia de Los Muertos and observed faithfully by the natives of Spain, and latinos residing in Canada and U.S.

There are some places that held costume parties while other villages organize parades of people dressed up as witches, skeletons and ghoulish creatures to remember their dead relatives and of course to parties.

Mexicans consider Halloween an important occasion, which is why they celebrate it with pomp and enthusiasm. The halloween festival is celebrated across Mexico and lasted for three days. The celebration begins on October 31 the Day of the Dead and ends of November 2. They also celebrate “Young Souls Day” on October 31, a festivity honoring the departed souls of children.

In Mexico, it is part of their halloween tradition to visit the grave of their relatives to clean and remove weeds. Some people even decorate their loved ones graves with flower and pine needles or create a temporary alter near the site. The altar will house the food offering which usually consists of tortillas, salt, meat, beans, fruit, alcohol and chilies.

Image Source
Halloween in some parts of the UK was called years ago as Mischief Night since the festival is associated with naughtiness as people would steal doors of homes then throw them in a pond or someplace away. The boys would also do other mischief like tying door latches, changing shop signs and many more. By the way, Halloween more popularly known as Nutcracker Night or Snap Apple Night as people indulge in roasting apples and nuts while exchanging stories on this day.

There are also no trick or treating in England as locals observed soul caking, a ritual similar to the popular Halloween tradition but instead on candy the children are given soul cake. The children upon receiving the soul cake recite a prayer for donors departed relatives. The children also carved pumpkins and visit houses singing songs then the people give them money. Other part of UK practiced till today the “Lating” ritual, and the custom of lighting candles from 11pm to midnight.