Are you planning to visit India for a holiday? India is a highly spiritual country, probably why festivals are at the heart of everyone who are living in India. Throughout the year, people celebrate the numerous India festivals with a passion so visitors can easily see the unique culture of this mystical country. In fact, with varied festivals celebrated yearly, India maybe even be called as the land of festivals.

India has a lot of holidays except not all the Indian holidays are celebrated throughout the country as some festivals are regional and not really popular. Come to think of it! There are only eight festivals celebrated by people with gusto and observed without fail regardless of their financial situation. 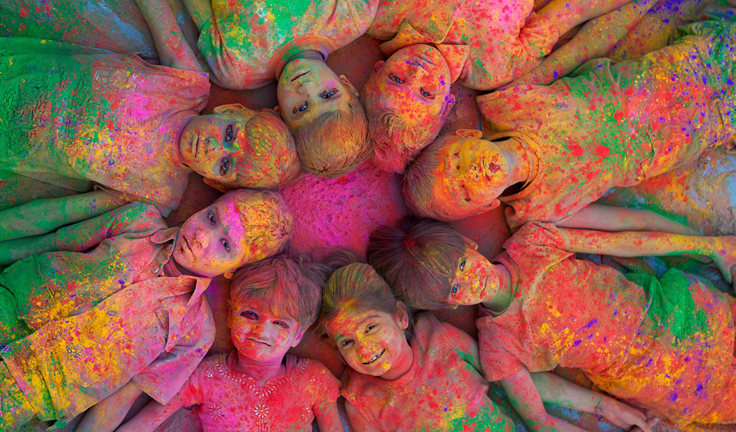 The following are Indian festivals that all people living in India celebrate throughout the year. 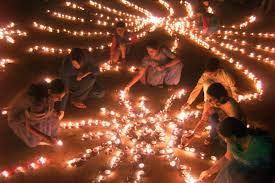 Image Source Diwali is the Hindu New Year, so it is no longer surprising why it is a popular Indian festival. The five-day festival marks the victory of good over evil as well as the start of the winter season.

The whole of India celebrated Diwali to honoring Lord Rama and his victory over the demon King Ravana who held hostage Sita. The Diwali festival is celebrated either on the month of October or November, the date depends on the moon cycle. This 2013, the celebration starts with the Dhanteras, the first day of November. But the main festivity takes place, not on the first day of the month but on the third day.

Take note, each day of the Diwali festival has a special meaning and activities like on the fifth day, sisters and brothers have a reunion or get together to share food and honor the bond that binds siblings together for life.

On Diwali, mostly on the third day of the festivities, people will be lighting diyas, a small lamp made of clay with candles inside. The diyas, which are placed in a business establishment and houses, are lit, there are also fireworks going off everywhere that can shatter eardrums because of the loud noise. People also decorate their homes with Rangoli, give gifts and sweets, buy new clothes, and even gamble during the festival.

Ganesh Chaturthi Festival honors Lord Ganesha, the Hindu elephant-headed god. This Hindu god is very popular and worshipped by the people because it brings good fortune and remove life obstacles. Ganesh Chaturthi, is celebrated on late August, or early September, the exact date, depends on the cycle of the moon.

This 2013, the Ganesh Chaturthi festival, is celebrated on September 9. The festivity last for 10 days, so the festival ends on September 18. It is celebrated in the state of Tamil Nadu, Goa, Maharashtra, Andhra Pradesh and Karnataka. 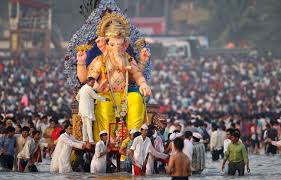 Image Source
The celebration begins with the installation of Lord Ganesha statues in podiums and homes. At the end of the 10 day festival, the statues are paraded throughout the streets of India, the states that celebrate this festival. The statutes accompanied by singing, dancing, and submersion in the bodies of water. Take note, yearly about 150,000 statues of Lord Ganesha submerged in the ocean. 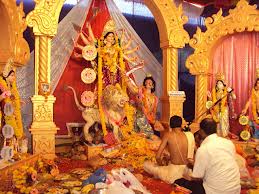 Image Source The Navaratri festival is celebrated to honor the Mother Goddess for nine days, and then on the tenth day the celebration is called Dussehra. The tenth day is devoted to honoring Lord Rama after he defeated the demon King Ravana. The victory also coincides with the victory of Goddess Durga over demon Mahishasura.

By the way, in the eastern part of India the festival is observed as Durga Puja. The celebration includes the immersion of the goddess huge statues in the holy Ganges River, making the festival a theatrical and social event as there are also dancing, drama and cultural performances throughout the country. 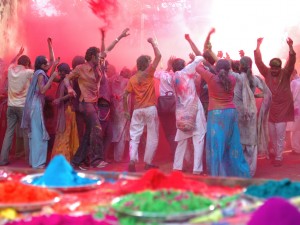 Image Source Holi also known as the “Festival of Colors” is a two-day event. The festival celebrates the triumph of good over evil and the abundance of the harvest season (spring). During Holi festival the people throw water as well as colored powder over each other, there are also dancing under the water sprinklers and of course huge parties. The people also indulged in Bhang, a paste made of cannabis plant.

Holi is a much-awaited festival in India as the celebration includes getting wet and dirty. 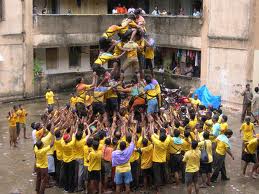 Image Source Govinda also known as Krishna Janmashtami celebrates the birthday of Lord Krishna. During Govinda festival, there are parties, large feasts, and unique tradition. One of the Govinda traditions is creating a human pyramid in order to reach and break open a clay pot filled with curd. 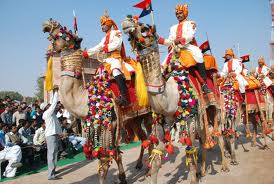 Image Source The Pushkar Camel Fair is celebrated for five days. The festival is very popular as each year about 50,000 camels converge on the town of Pushkar, a small dessert town in Rajasthan. The camels are dressed up, shaved, paraded, and entered into beauty contests. The camels are also raced and even traded, making this festival fun and exciting especially for foreign visitors as they get to experienced traditional style of Indian festival. 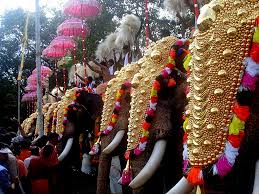 Image Source In the state of Kerala, on the Southern part many temples are renowned for their temple festivals. The festivals are popular because of the large parade of elephants adorned with dazzling ornaments. In fact, the parades of elephants are the main attraction, so drummers, musicians, and colorful floats accompany the procession. 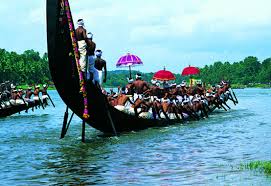 Image Source Onam festivl is celebrated to honor the homecoming of King Mahabali. Onam is a ten-day festival, celebrated with fun fare, colorful flowers, and large feast. A big event in Kerala, that is why most of the houses decorated with flowers arranged in intricate patterns (rangoli). During the Onam festival, the people also buy new clothes, indulge in dancing, games and sports such as the snake boat races.

If you are visiting India, it is best to schedule your trip during Indian holidays to experience the true Indian.